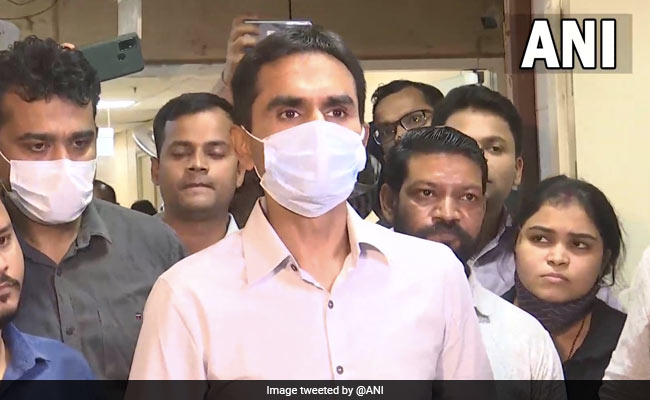 Anti-drugs officer Sameer Wankhede who has been handling the Mumbai drugs-on-cruise case and other sensitive cases linked with the entertainment sector will no longer handle these cases, sources have said.

Mr Wankhede has been in the centre of a big controversy over the arrest of actor Shah Rukh Khan’s son Aryan Khan from a cruise off the Mumbai coast. The Narcotics Control Bureau or NCB zonal director was accused by leaders of the ruling Shiv Sena and the Nationalist Congress Party of framing false cases to tarnish the image of Bollywood and Maharashtra.

“I have not been removed from investigation. It was my writ petition in court that the matter be probed by a central agency. So the Aryan (Khan) case and Sameer Khan case are being probed by the Delhi NCB’s special investigation team. It’s a coordination between NCB teams of Delhi and Mumbai,” Mr Wankhede told news agency ANI today.

Six drugs case – including the Aryan Khan case – that Mr Wankhede handled, said to be linked with a number of Bollywood personalities, have been transferred to a team headed by Indian Police Service or IPS officer Sanjay Singh of the NCB. Mr Singh is 1996-batch Odisha cadre IPS officer.

Mr Wankhede came to Delhi at the NCB’s headquarters on October 26 amid a row over payback allegations and his war of words with Maharashtra minister and Nationalist Congress Party leader Nawab Malik.

The NCB zonal director’s name cropped up in the row over alleged paybacks following an affidavit by a witness in the Aryan Khan case, who claims to be the bodyguard of Kiran Gosavi, a private investigator whose selfie with Aryan Khan had thrown up many questions.

In an affidavit, the witness Prabhakar Sail claimed that he had heard a conversation between Mr Gosavi and one Sam D’Souza on October 3 about a Rs 18 crore deal. Mr Gosavi said they will have to give Rs 8 crore to Mr Wankhede, Mr Sail said in the affidavit.

The NCB has backed the officer, saying he has an “impeccable record”.

“Why Not”: Here’s What Hardik Pandya Said When Asked About Full Time Captaincy | Cricket News

PUBG New State Renamed to New State Mobile: All You Need to Know