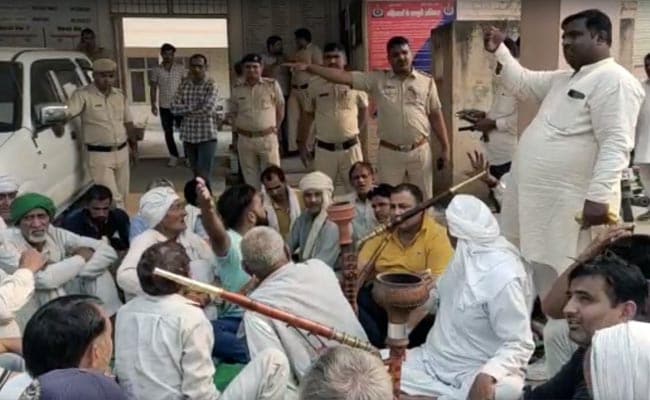 Farmers surrounded BJP leaders at a temple in Haryana’s Rohtak

Several BJP leaders who had gone to a temple in Haryana to watch Prime Minister Narendra Modi’s live telecast from Kedarnath temple found themselves surrounded by farmers, who have been protesting for nearly a year against three controversial agricultural laws.

The protesters held the BJP leaders including former minister Manish Grover hostage for the past six hours even as the police tried to break the tight cordon formed by the farmers. The protesters demanded that Mr Grover should apologise for using objectionable language on farmers.

The police said more personnel have been rushed in from other districts to control the situation at the temple in Kiloi village in Rohtak district, some 78 km from Gurgaon. Two protesters have been arrested. The Delhi-Hisar National Highway has been shut to traffic for now.

The other leaders who are being held hostage inside the temple are party organisation minister Ravindra Raju, Mayor Manmohan Goyal, BJP district chief Ajay Bansal and party leader Satish Nandal.

Farmers especially from Haryana and Punjab have been protesting against the farm laws alleging that they would give control of agriculture in private hands. The government has denied this allegation and has even offered to amend the laws.

BJP leaders who have been in and around areas where big concentration of protesting farmers have gathered have often become targets in recent times, since the BJP is also in the centre, which made the new laws.

BJP Rajya Sabha member Ram Chander Jangra also faced slogans and black flags by a group of farmers in Haryana’s Hisar district today when he came to inaugurate a dharmshala (inn). The windshield of his car was smashed in a fight between the police and farmers.

Blizzard Confirms Diablo 4 Will Not Include Pay-to-Win Microtransactions

WhatsApp Web, Desktop Users Get New Custom Sticker Maker Feature: How to Use