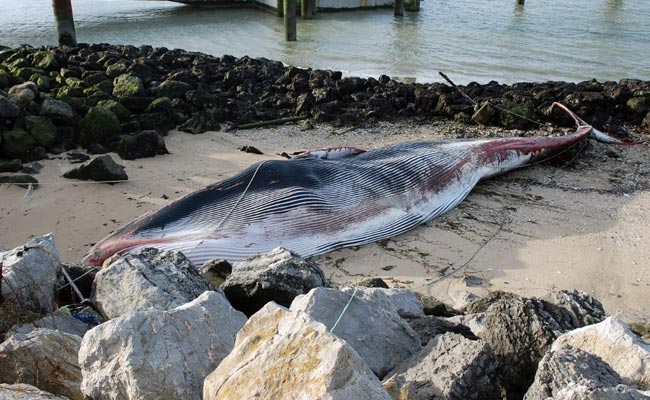 A dead whale stranded in the port of Calais, northern France.

French animal experts said on Sunday they were preparing to conduct an autopsy on a 19-metre-long whale that died after getting stranded at the northern port of Calais.

The fin whale, weighing around 15 tonnes, apparently beached itself after getting injured, a rare phenomenon in the area.

“It is a female, about 30 years old, who ran aground on Saturday,” Jacky Karpouzopoulos of the CMNF animal protection group told AFP.

“She was sick but she reached the port of Calais still alive, then she went too close to the rocks and she ran aground.”

Karpouzopoulos said the whale would be pulled to an area where they could carry out an autopsy on Tuesday.

Fin whales, the second-biggest mammal species in the world after the blue whale, are listed as vulnerable by the International Union for Conservation of Nature.

Several species of whale populate the waters around France.

Earlier this year, a humpback whale was discovered washed up on a beach in France’s Mediterranean south.