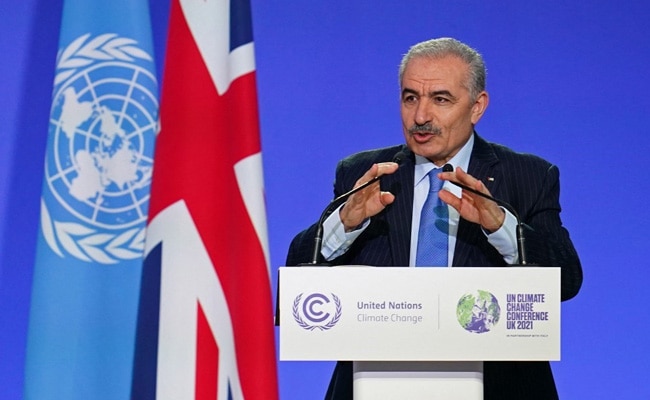 Acknowledging India’s “growing weight” in international politics, Palestinian Prime Minister Dr Mohammad Shtayyeh has sought for New Delhi’s “well-established and distinguished” role in the Middle East during his meeting with Prime Minister Narendra Modi where the two leaders also discussed ways to enhance the bilateral ties and political developments in the region.

PM Shtayyeh met PM Modi on the sidelines of COP26 Summit in Glasgow in what was the first such high-level meeting between the two sides since the latter’s visit to Palestine in February 2018, a statement from the Palestinian Prime Minister’s Office said on Wednesday.

The Palestinian prime minister briefed PM Modi on the latest political developments in the region and discussed possible ways to enhance and strengthen bilateral relations between Palestine and India, the statement said.

“Palestine attaches great importance to its relations with India, who has a growing weight in international politics,” PM Shtayyeh said during the meeting.

“We are ready for all forms of cooperation with India, which serves as a non-permanent member of the UN Security Council for the 2021-2022, and was re-elected to the Human Rights Council for the 2022-2024 term,” PM Shtayyeh told PM Modi.

“We look forward to a well-established and distinguished Indian role in the Middle East based on the historical perspective of India’s foreign policy, foremost of which is supporting the Palestinian people’s right to self-determination and the establishment of an independent State of Palestine, with Jerusalem as its capital,” he added.

“India’s role in international organisations, primarily the UN Security Council and the Council of Human rights requires strenuous efforts in cooperation with all related parties to achieve security and stability in the Middle East and West Asia, which is of great importance to India,” the Palestinian leader said.

“This support must be parallel and complementary with the political support of the Palestinian cause and in a manner that guarantees the implementation of international legitimacy resolutions,” the Palestinian prime minister said during the meeting.

Last year, India gave $2 million in aid to the United Nations Relief and Works Agency working for the welfare of Palestinian refugees in support of its core programmes and services, including education and health, amidst the coronavirus crisis.

Seventeen agreements have been signed under an India-Palestine development partnership between the two sides in the fields of agriculture, health care, information technology, youth affairs, consular affairs, women empowerment and media in the past five years.

New Delhi is to provide an assistance of around $72 million through these agreements in projects like the post-2014 war reconstruction efforts in Gaza, construction of five schools, setting up a centre of excellence for information and communication technologies at Al-Quds University and developing a satellite centre in Ramallah.

PlayStation Diwali Sale With Discounted Games to Start From October 5

Meta settles lawsuits with 2 firms engaged in scraping its data