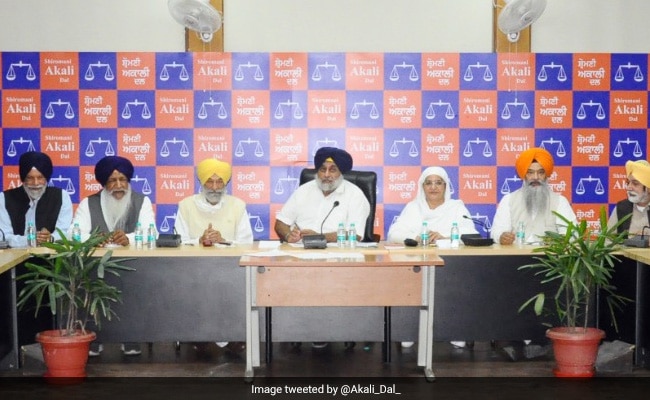 The Shiromani Akali Dal (SAD) today asked the Congress government in Punjab to issue an executive order for non-implementation of the centre’s move of extending the BSF’s jurisdiction.

The party’s core committee demanded the Punjab government issue executive orders directing its officers not to allow the implementation of the central decisions in the state, saying these fall under the state subjects in the Constitution of India, according to a party release here.

Party’s core committee demands CM @CHARANJITCHANNI to take a cabinet decision to stop BSF’s deployment in half of Pb, & also an executive decision to stop execution of #BlackLaws. Cong govt is befooling Pbis with assembly resolution on issues falling under it’s own jurisdiction. pic.twitter.com/J9yRzsp6F4

“The Congress government led by Charanjit Singh Channi is trying to befool the people of Punjab by offering a Vidhan Sabha resolution on these two issues while the fact is that his own government is fully empowered to stop the implementation of central orders on issues which fall under the state government’s jurisdiction. Agriculture and law and order are state subjects,” stated a resolution passed by the SAD core committee.

“Why are they coming to the Vidhan Sabha for a resolution? Is the Vidhan Sabha stopping the Punjab government from passing executive orders to stop BSF (jurisdiction extension) and farm laws,” it further said.

The Union government had recently amended the BSF Act to authorise the border guarding force to undertake search, seizure and arrest within a 50 km stretch, up from the existing 15 km, from the international border in Punjab, West Bengal and Assam.

A special session of the Punjab Assembly will be convened on November 8 to reject the centre’s notification extending the jurisdiction of BSF and the farm laws.

Harcharan Bains, principal adviser to the SAD president, said the party also slammed the decision of the central government to extend the provisions of the J&K anti-terror act to Punjab, calling it a frontal assault on federalism.

The SAD asked the Congress government to come clean on its stand against the centre’s decision in this regard.

The core committee also demanded a compensation of Rs 50,000 and Rs 15,000 per acre, respectively, to farmers and farm labourers affected by crop damage due to pink bollworm pest attack.

FTX founder Sam Bankman-Fried to testify before US House panel

Is JioPhone Next Worth the Anticipation and Hype?