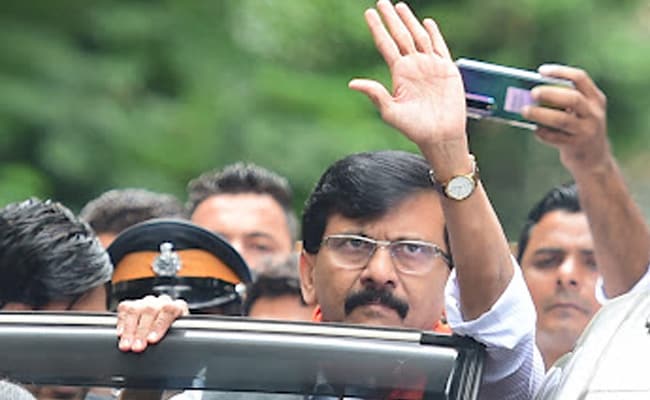 The 60-year-old Shiv Sena leader was arrested on August 1.

A special court in Mumbai today sent Shiv Sena leader Sanjay Raut to judicial custody for 14 days in an alleged land scam case. He will now stay in Enforcement Directorate’s custody till August 22. The probe agency did not ask for an extension of the Sena leader’s custody.

In view of his ill health, the court also allowed Sanjay Raut to receive homemade food and medicines in judicial custody. However, it refused to pass an order on his request for bedding.

The court also ordered that the Superintendent of Arthur Road Jail be informed about the Sena leader’s health so that necessary arrangements are made for him.

The court last Thursday extended Mr Raut’s ED custody till August 8, while noting the agency had made “remarkable progress” in the probe into the money laundering case involving the Shiv Sena leader, his wife, and associates.

Mr Raut, a Rajya Sabha member, was found to be the beneficiary of Rs 1.17 crore of proceeds of crime in addition to Rs 1.06 crore that had come to light earlier, the probe agency has claimed.

His wife, Varsha Raut, was also questioned by the federal probe agency for nine hours last week in connection with the case.

The 60-year-old Shiv Sena leader was arrested on August 1 in connection with alleged financial irregularities in the redevelopment of the Patra Chawl (row tenement) in suburban Goregaon. He has refuted the charges.

He was produced before special Prevention of Money Laundering Act (PMLA) judge MG Deshpande at the end of his ED custody on Monday.

Four months ago, the ED – which alleges a Rs 1,000-crore scam in the redevelopment of Patra Chawl in Mumbai’s Goregaon – had attached Rs 11 crore worth of assets of Varsha Raut and two of Sanjay Raut’s associates.

Watch the New Trailer for Delhi Crime Season 2, Out August 26