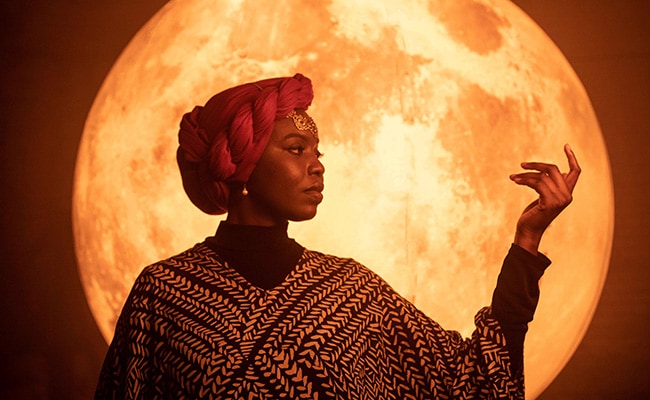 Emtithal Mahmoud during shooting of her poem Di Baladna.

She heard them when she spoke to Rohingya refugees in Bangladesh, and when she met Syrians at a camp in Jordan: the same cries of the dispossessed that rang during her own childhood, when she escaped from Darfur.

Now, Sudanese-American poet Emtithal “Emi” Mahmoud – crowned world champion at the 2015 Individual World Poetry Slam in Washington DC – is carrying the message of those voices to world leaders at the climate summit in Scotland.

Her mission, she explained to Reuters, is “to just get the most vulnerable people’s voices into spaces where we’re not normally represented”.

“At 11 years old I saw my neighbour’s house crumble before my eyes,” she writes in her poem entitled ‘Di Baladna’, or ‘Our Land’ in Arabic, which she unveils on Monday at the COP 26 U.N. climate summit in Glasgow.

“Our country was already locked in turmoil and now the earth began to purge us too,” it reads.

As a refugee herself and a goodwill ambassador for U.N. refugee agency UNHCR, she has spoken to fellow refugees around the globe. She saw how much they had in common.

“…You realise that the same vulnerabilities and issues and sensitivities and crises that we witnessed during the Darfur crisis are being repeated over and over,” she said.

“I think I try to answer the question a little bit of how it is that we can bring everyone into the same cause that a lot of us are in right now.”

At COP26, she will be appealing for urgent action but also highlighting the efforts refugees are already making to adapt to their habitats.

“Is the situation dire? Absolutely, yeah. But can it be changed? It can, and they’ve already changed it themselves. But that work can go to waste if we don’t support them sometime soon.”

Explained: WhatsApp multi-device support, how it works, how to enable and more – Times of India