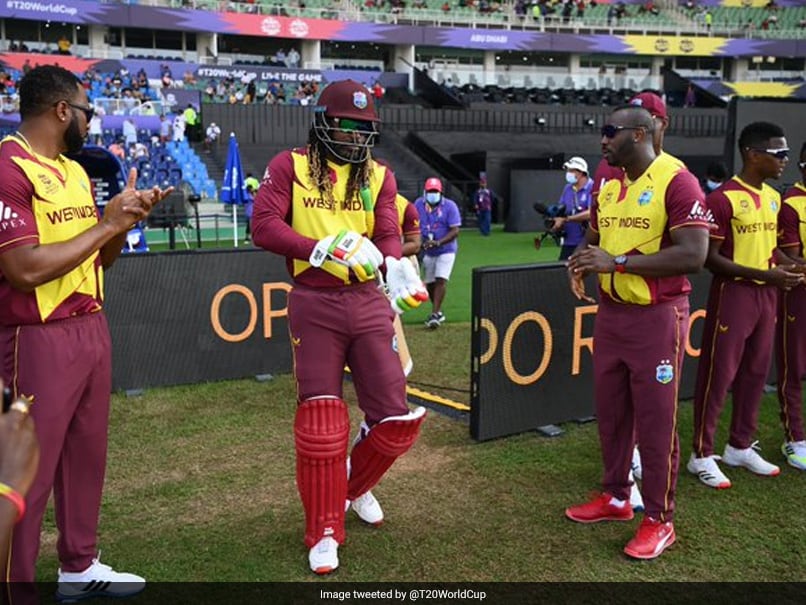 Swashbuckling left-hand batter Chris Gayle walked off the pitch after his dismissal against Australia in Saturday’s Super 12 game in the T20 World Cup in Abu Dhabi to standing ovation from his teammates, sparking speculation that this may have been the last time he turned up in West Indies colours. Cricketer-turned-commentator Ian Bishop felt the same after Gayle was dismissed for 15 runs off nine balls by Pat Cummins. With West Indies already out of contention for a place in the semi-finals, the Super 12 game against Australia was their last official fixture in the ongoing T20 World Cup. With Dwayne Bravo announcing his retirement from international cricket earlier, Bishop paid a memorable tribute to Gayle as he made his way back to the dugout.

“Well there we go. That could tell us everything we need to know that it could be the last time that we see Chris Gayle in West Indies colours. His teammates applauding him,” Bishop said live on air.

He mentioned a few of the batter’s achievements, which included being the highest run-scorer in T20s and also possessing incredible skills to excel in Test cricket.

“A great servant of West Indies cricket and the world game. Leading run scorer in T20s, excellent Test batter and that could be the last glimpse of him in maroon. This will live in the legacy of the ‘universe boss’.”

US Summons Chinese Ambassador Over “Irresponsible” Actions On Taiwan

fenster: Myanmar court sentences US journalist to 11 years in jail – Times of India