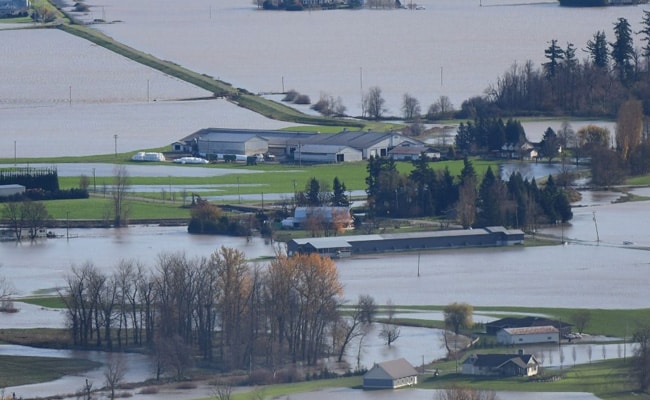 Officials in flood-stricken western Canada announced travel and fuel restrictions Friday as the region grapples with supply difficulties, the latest on a list of struggles caused by torrential rains.

Record rainfall hit southwestern British Columbia Sunday and Monday resulting in landslides and flooding which destroyed roads and infrastructure and forced the temporary closure of the Trans Mountain pipeline.

“We are asking people to limit their fuel consumption and vehicle travel at this time and are putting in place orders under the provincial state of emergency to support this,” Mike Farnworth, the province’s public safety minister, said at a press conference.

Individuals will no longer be able to buy more than 30 liters (eight gallons) of fuel when going to the pump.

“We are asking people not to travel through severely affected areas- for their own well-being, but also to make sure the fuel we do have goes toward the services people need in this time of crisis,” Farnworth said.

“These steps will keep commercial traffic moving, stabilize our supply chains and make sure everyone gets home safely,” he added.

Authorities are still searching for four missing people in the Pemberton region, where a woman’s body was discovered this week by relief workers.

The army, which has been mobilized since Wednesday, is working in several areas of the province to clear roads and build a new levee in the town of Abbotsford, which was partially submerged and could be subject to further rain forecast for next week.

Some 60 soldiers arrived in the city on Thursday.

“Pretty much every army base in the country is standing by to be ready to deploy if they have to,” Pamela Hogan, a public affairs officer with the Canadian Armed Forces, told AFP.

“Canadian Armed Forces members will be assisting the civilian engineers that are in charge of the dike building,” she said.

Heavy rains are expected again in the area next week.

In the course of months Canada’s Pacific coast has suffered repeat natural disasters, including extreme summer heat at the end of June which experts attributed to climate change, followed by major wildfires.

Garena Free Fire: What Is It? Why Was it Banned? 5 Alternatives

Indian ecommerce user base to beat US numbers in two years: Bain report